Because it is impossible for individuals to “read” everything in a large corpus, advocates of distant reading employ computational techniques to “mine” the texts for significant patterns and then use statistical analysis to make statements about those patterns (Wulfman 2014).

Although the attention of linguists is commonly drawn to forms other than proper nouns, the significance of place names in particular exceeds the usual frame of deictic and indexical functions, as they encapsulate more than a mere reference in space. In a recent publication, I present two studies that center on the visualization of place names in literary texts written in German, with particular emphasis on the concept of visualization, that is on the processes and not on the products (Crampton 2001). I discuss research on toponym extraction and linkage from an interdisciplinary perspective and address questions related to research theory and practice.

The first case consists of a preliminary study of travel literature based on Richthofen’s Travel Journals from China (Tagebücher aus China, 1907) and relies on manually annotated data. The resulting map retraces the path taken by the author in the Shandong province by combining coordinates, sequences, and a sense of time. In order to critically analyze this synthesis the concept of constellation is introduced and discussed.

The second study focuses on the literary magazine Die Fackel (1899–1936) with the particular example of co-occurrences of toponyms and is based on automatic extraction. The paths drawn on the map depict chains of thought and lines of flight. The result is understood through the concept of the rhizome, by which heterogeneous information can be connected and displayed. 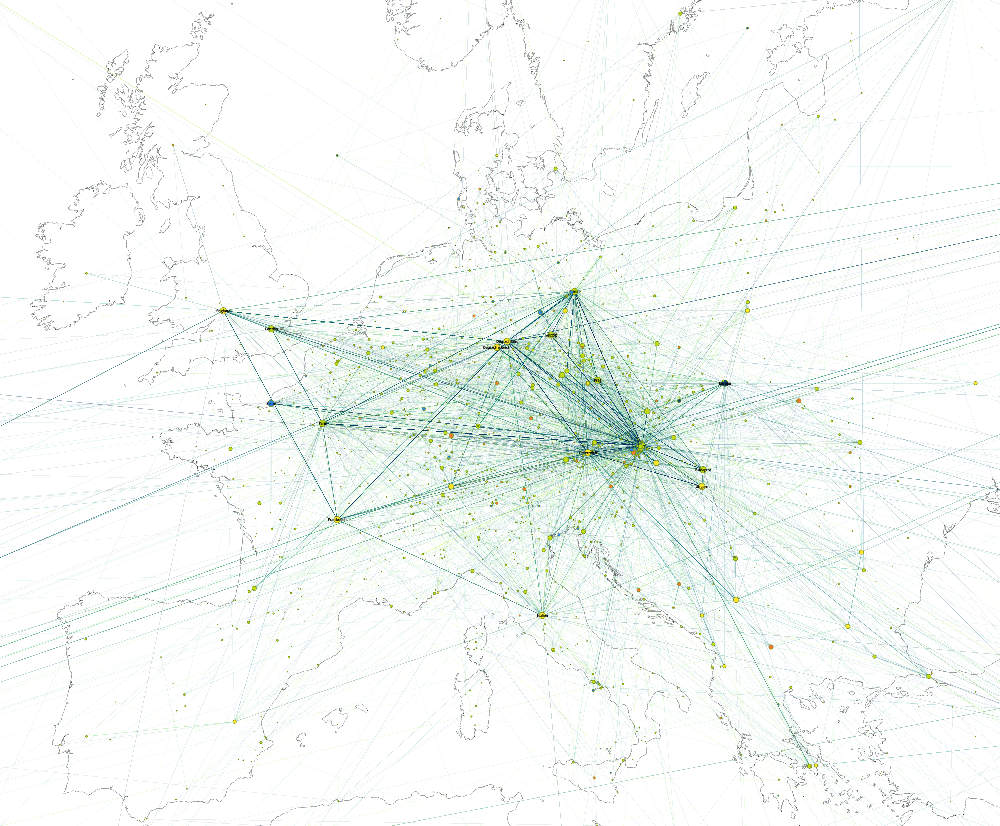 One of their common denominators is the necessity to construct appropriate gazetteers, that is mapping historical and possibly not yet standardized variants to a canonical standard from which to derive geographic metadata. Another common denominator consists of the connections that are drawn between the extracted toponyms in the exploratory sense of geographic visualization. Even if the map in itself is relative, being “less important than the process of making it and using it” (Caquard & Cartwright 2014), it plays an ambiguous part in distant reading, since it has to be flexible enough to adapt to new contexts and analyses, while remaining exact and in this sense trustworthy. The information it contains and reveals cannot be verified on a point-per-point basis, yet it can be the starting point of a comprehensive interpretation.

Digital literary studies are not mere numeric accounts: if they deal with detecting, counting, and projecting occurrences, one also ought to describe and criticize the detachment provoked by “blind” computer-based thinking. The finality of “visual linguistics” is not an apparatus or a concept of an operational nature, but the substrate of interpretable representations which do not follow blindly numeric data but instead put things in perspective.