This paper introduces a Twitter corpus focused geographically in order to (1) test selection and collection processes for a given region and (2) find a suitable database to query, filter, and visualize the tweets.

“To do linguistics on texts is to do botanics on a herbarium, and zoology on remains of more or less well-preserved animals.”

My study of 2013 concerning other social networks (Crawling microblogging services to gather language-classified URLs) is not reproducible anymore due to API and terms of service changes.

Main issues related to the collection of Austrian tweets

The corpus focuses on Austrian users, as data collection grounds on a two-tier detection process addressing corpus construction and user location issues. The emphasis lies on short messages whose sender mentions a place in Austria as his/her hometown or tweets from places located in Austria. The resulting user base is then queried and enlarged using focused crawling and random sampling, so that the corpus is refined and completed in the way of a monitor corpus.

Schema of the implementation

The current volume (May 14th 2016) is 26,4 million tweets from 143,056 different users. This corpus is comparable to the German Snapshot (Scheffler 2014) in terms of volume with a number of users one order of magnitude smaller, which should then lead to a better yield overall.

The tweets are indexed using Elasticsearch and queried via the Kibana frontend, which allows for queries on metadata as well as for the visualization of geolocalized tweets (currently about 3.3% of the collection vs 1.1% for the German Snapshot) 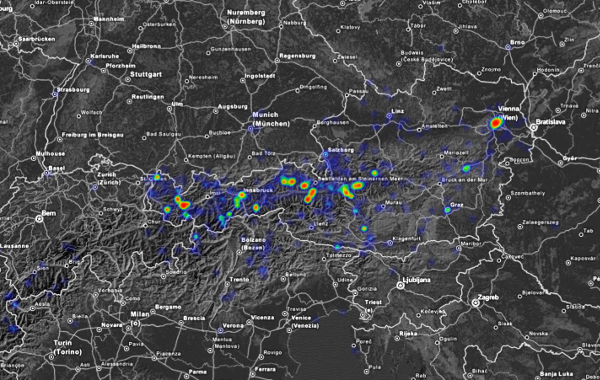 I presented a two-tier collection process addressing corpus construction and user location issues. The current volume is several millions of tweets per month.

Potentially interesting users are geographically and linguistically very mobile, and even among users who use geolocation services, the proportion of tweets with actual location data may vary greatly.

The E(L)K (Elasticsearch-Kibana) stack scales, so that further developments can be considered: a larger corpus (Germany + Switzerland), a state-of-the-art linguistic annotation, as well as the release of code and/or tweet IDs.