It is not only a matter of scale : the perspective one chooses is crucial when it comes to visualize how difficult a text is. Two main options can be taken into consideration:

I already dealt with the first type of visualization on this blog when I evoked Amazon’s text stats. To sum up, their simplicity is also their main problem, they are easy to read and provide users with a first glimpse of a book, but the kind of information they deliver is not always reliable.

Sooner or later, one has to deal with multidimensional representations as the number of monitored phenomena keeps increasing. That is where a real reflexion on finding a visualization that is faithful and clear at the same time. I would like to introduce two examples of recent research that I find to be relevant to this issue.

An approach inspired by computer science

The first one is taken from an article by Oelke et al. (2010). It is part a work by computer scientists of Konstanz (Germany) who try to apply their approach and their experience of visualization to language processing. 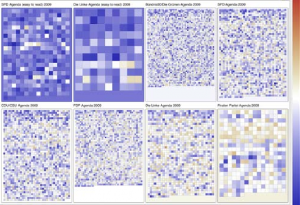 It is quite obvious that the summary is obfuscated by the amount of information. As far as I know, this kind of approach grounds on the belief that the human eye is able to extract patterns out of a complex image. This idea seems to date back to Bertin (1967), a seminal contribution to information visualization. But in this case the appearance of patterns does not always take place, as one may not easy control the display of information.

Nonetheless, there are two interesting facts in this work, asthe authors start from readability formulas comparable to those used by Amazon. The difference is that they try to mirror the possible evolutions within the text as well as the possible correlation of phenomena.

A visualization following the course of the text

The second example comes from Karmakar & Zhu (2011). It features an attempt to take advantage of text structures to reach an relevant image of a text. In this regard, their approach is closer to natural language processing, its operating model and its evaluation metrics.

It is a local approach of readability as the text is seen in a linear fashion: 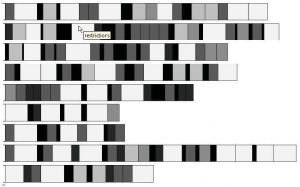 The horizontal bars on this chart picture the sentences of the article, so that a relevant criterion immediately strikes the eye: the evolution of sentence length in the text becomes clear. So is the distribution of complex words and complex parts (as they use tools to estimate parse tree depth) in the text.

I will not discuss here the criteria which Karmakar & Zhu use to assess readability, I would just like to point out that their definition of complexity is not necessarily in accordance with linguistic standards and that their interpretation of the visualizations is not obvious (especially their views on clause complexity).

There are a few common features between these research papers which seem to be good starting points :